In this Kali Yuga, where the world is full of conflict and sin, salvation is difficult to obtain. In such a situation, one’s hope and faith arise when one finds answers to all their questions and a chance to confess their sins. Yes, it is believed to be a path of salvation, Char Dham. Initiated by Adi Shankaracharya, a great reformer of the 8th-century to revive Hinduism and its ideological faith in Bharatvarsha, this yatra consists of Four Hindu pilgrimage sites, namely Badrinath, Rameswaram, Dwarka, and Puri. Situated in four different directions, they form a perfect square-like structure with Badrinath and Rameswaram lying on the same longitude and Dwarka and Puri passing through the same altitude.

These pilgrimages are open for worship throughout the year except Badrinath Dham, which is closed in Winter Season due to seasonal snowfall and chilling breezes. The Char Dhams are often considered the most revered sites for Hindu Dharma (Religion) followers that have to be visited once in their lifetime. These sacred places are dedicated to Lord Vishnu’s Avatar (Incarnation). As per the definition by Adi Shankaracharya, 2 sites are dedicated to Lord Vishnu, 1 to Lord Shiva, and 1 is a mixed site. According to Puranas, Hari (Vishnu) and Hara (Shiva) are referred to as eternal friends and there is a saying that wherever Lord Vishnu resides, Lord Shiva resides nearby and so Char Dham follows this rule, where Kedarnath is considered as pair of Badrinath, Ram Setu is considered the pair of Rameswaram, Somnath is considered as the pair of Dwaraka, and Lingaraja Temple is associated with Jagannath Temple. 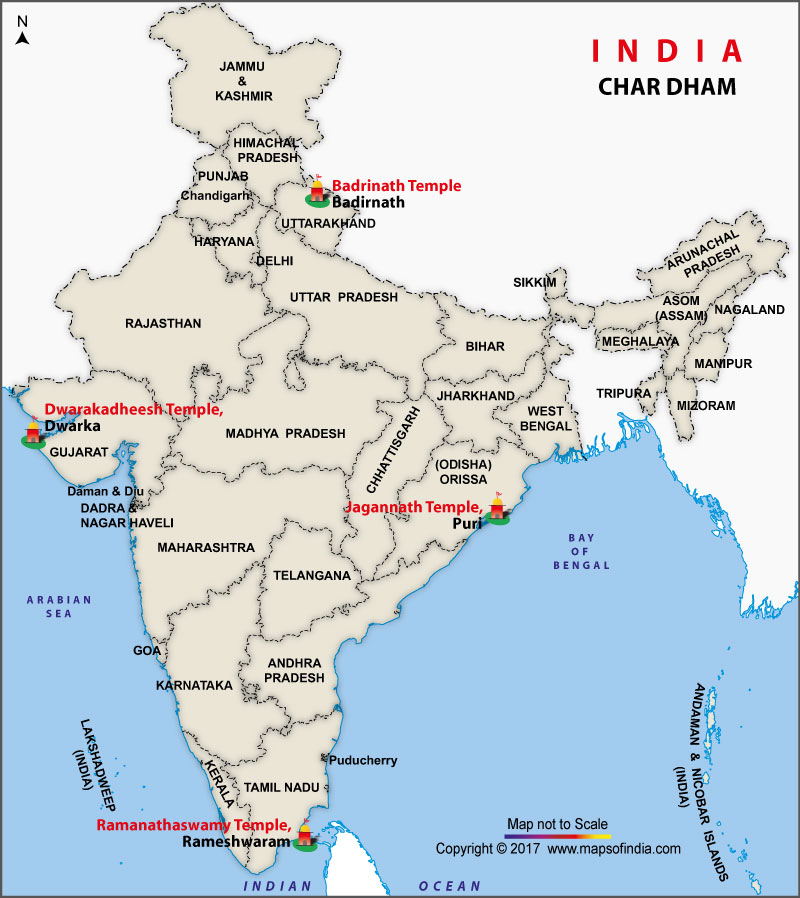 Often called as Badrinarayana Temple, it is situated in Garhwal hill tracks along the banks of the Alaknanda river in the Badrinath town of Chamoli District, Uttarakhand, India. The town lies between the Nar and Narayana mountain stretches and Nilkantha Summit’s shadow (6,560 m). Dedicated to Lord Vishnu (Narayana), the temple is also one of the 108 Divya Desams, all of which are dedicated as the Divine place of abode of Lord Vishnu. One of the holiest shrines, it attracts pilgrimage to it having recorded 1,060,000 visits till 2012, though it is open for six months tentatively between the end of April and the beginning of November because of extreme cold conditions in the Himalayan region. The idol of the presiding deity is 1 foot (0.30 m) made out of black granite. Considered by many Hindus to be one of the eight swayam vyakta kshetras, or self-manifested deities of Vishnu, it is in the form of Badrinarayana.

The well-known festival celebrated in this holy shrine is Mata Murti ka Mela, which commemorates the descent of the river Ganga (Ganges) on mother earth. The temple is of ancient importance with some remarks about it in religious texts like Vishnu Purana and Skanda Purana. It has three structures: the Garbhagriha (sanctum), the Darshan Mandap (worship hall), and Sabha Mandap (convention hall). The conical-shaped roof of the garbhagriha is approximately 49 feet in height with a small cupola on top, covered with a gold gilt roof.

Made out of Shaligram, the deity of Lord Badrinarayana is housed in a gold canopy under a Badri (Berries) tree which shows him holding a Shankha (conch) and a Chakra (wheel) in two of his arm in a lifted posture and other two arms resting on his laps in Padmasana posture. The sanctum also houses images of the god of wealth-Kubera, sage Narada Nar, and Narayana ( Incarnation of Lord Vishnu as twin brother), Goddess Lakshmi (the consort of Vishnu), Garuda (the vahana of Narayana), and Navadurga, the manifestation of Durga in nine different forms.

According to Hindu Ithihas (Puranas), Badrinath became prominent when Nar-Narayana did Tapasya when the place was filled with berry trees, so it became prominent as ‘Badrika-Van’ (in Sanskrit) i.e., the forest of berries. In local people, there is a faith that Mata Lakshmi took the form of a huge berry tree to protect Nar-Narayana from sun and rain. Post-Tapasya, Narayana said, people will always take her name before him and this is how we got our Lakshminarayana. So, it got the name as Badri-Nath, i.e., the Lord of Berry Forest. All these events and religious incidents took place in Satya Yuga and so Badrinath became popular as the first Char Dham.

Dedicated to Lord Shiva, it is located on Pamban Island (also known as Rameswaram Island), in the Indian state of Tamil Nadu. Apart from being one of the Char Dham, it is also one of the twelve Jyotirlinga temples and 275 Paadal Petra Sthalams, where the three most admired poets who wrote about Shiva – Appar, Sundarar, and Tirugnana Sambandar, have glorified the temples with their songs. A holy pilgrimage site for the religious devotees, the temple has Tamil architecture type with an expansion during the 12th century by Pandya Dynasty. The presiding deity, the lingam of Ramanathaswamy (Shiva), was established and worshipped by Lord Rama (7th Avatar of Lord Vishnu) before crossing the bridge made by his dedicated followers and the supreme worshipper Hanuman. The literal meaning of the temple’s name is ‘Lord of Rama’, i.e., Ramanathaswamy in Sanskrit. These incidents took place in Rama’s era and so, it got its importance in Treta Yuga and later as Second Char Dham.

There are two lingams inside the sanctum – one built by Rama, from sand, residing as the main deity, Ramalingam and the one brought by Hanuman from Kailash called Vishwalingam. Lord Rama instructed that the Vishwalingam should be worshipped first since it was brought by Hanuman and so the tradition continues till date. There are 24 important holy water bodies out of 64 Tirthas (holy water bodies), in and around the island of Rameswaram as mentioned in Skanda Puran. Bathing in these Tirthas is a major aspect of pilgrimage and 22 of which are present within Ramanathaswamy Temple.

The temple priests are Marathi Brahmins of Maharashtra who get Diksha from Sringeri Mutt. There are separate shrines for Lord Shiva and his consort Maa (Goddess) Parvathavardhini separated by a corridor. The total length of all these corridors is 3850 feet. The temple is among those offering free meals to all the devotees under the Free Meals Scheme of the State Government, thus offering humanitarian services to the poor and needy ones.

Popularly known as the Jagat Mandir or Nija Mandir, it is dedicated to Lord Krishna (8th Avatar of Vishnu) who is worshipped by the name Dwarakadhish or ‘King of Dwaraka’ in the Dwaraka town of Gujarat, India. The third Dham got its importance in the Dvapra Yuga, when Lord Krishna shifted his residence from his birthplace, Mathura to Dwarka. A five-story building supported by 72 pillars fabricates the main shrine of this temple which follows the guidelines and rituals created by Vallabhacharya and Vithleshnath under Pushtimarg temple.

Dwarakadhish is the 98th Divya Desam of Vishnu on the subcontinent and it is conjectured that this temple location is 2,500 years old where Lord Krishna built his city. So, Krishna Janmashtami or Gokulashtami (birth festival of Krishna) is the major celebration in the town. Being a part of 3 main pilgrimage sites related to the “Krishna” circuit, it is popular as Dwaraka Parikrama at Dwarakadhish temple which has two entrances, the main entrance (north) is called “Moksha Dwara” (Door to Salvation), and the other one (south) being called as “Swarga Dwara” (Gate to Heaven).

The main deity present in the sanctum is known as the Trivikrama form of Vishnu (5th Incarnation) and is depicted with four arms. A beautiful message is depicted by the flag of this shrine which is triangular in and with symbols of Sun and Moon on it, which is believed to indicate that Krishna would be there till Sun and moon exist on Earth. The temple was awarded the certificate of “World Amazing Place” in 2021 by the World Talent Organization, New Jersey, USA.

The name itself creates an aura full of positivity, “Jagannath” meaning, the lord of the universe. The Jagannath Temple is of Kalinga Architecture type dedicated to Jagannath, a form of Vishnu for Kali Yuga, in Puri in the eastern coastal state of Odisha. Famous for its annual Ratha Yatra, or chariot festival, in which the three principal deities are pulled on huge temple cars which are florally decorated, the temple was built by the First King of the Eastern Ganga Empire, Anantavarman Chodaganga Deva.

The temple has a huge complex covering an area of 400,000 sq. feet with four entrances to it, the major one being the “Singahdwara” whose literal meaning in Sanskrit is Lion Gate. Unlike the stone and metal icons found in most Hindu temples, the image of Jagannath is made of wood and is ceremoniously replaced every 12 or 19 years by a replica, and daily food offerings are made to the Lord six times a day. Following the custom, every day a different flag is waved on Nila Chakra.

Talking about Nila Chakra, it is a discus mounted on the top of the temple. A disc with eight Navagunjaras carved on its outer circumference, it is distinct from the Sudarshana Chakra which has been placed with the deities in the inner Sanctorum and the most revered iconic symbol in the Jagannath Complex or cult. The atmosphere of Puri gets energetic and pious during Ratha Yatra, Chandan Yatra, Snana Yatra, and Nabakalebara. Being held in June every year, the Ratha Yatra is the most important festival. This spectacular festival consists of a procession of three huge chariots bearing the idols of Jagannath, Balabhadra, and Subhadra (the three siblings) from the Grand Avenue of Puri till their destination at Gundicha Temple. During Snana Yatra, these idols are placed for ceremonial bathing.

The data has been compiled from various sources.

The Peer Kho Cave Temple, also known as ‘Riksharaj Gufa’ is a cave temple dedicated to Lord Shiva situated on the banks of the Tawi River in the Shivalik Range of Jammu district, Jammu & Kashmir. In the backdrop of igneous rocks and acacia forests, the temple is believed to be constructed in the 15th Century AD by the Raja Ajaib Dev of the Dogra regime.

Aptly called the Cultural Capital of India, Kasi (Varanasi) is an ultimate pilgrimage center for Hindus for ages. According to Hindu Ithihas (Purana), it is believed that Kasi was founded by Lord Shiva, one of three principal deities along with Vishnu and Brahma and so here we can see a mighty form of River Ganges (Ganga) which is said to have its origin in the tresses of Lord Shiva.

According to Hindu Ithihas, these panch sites are built by Pandavas, the heroes of the Kurukshetra Yudha. After the yudha, they wished to atone for the sins of committing gotra hatya and Brahmanahatya during the yudha (war).